It's SXSW time in Austin!  Downtown is swarming with celebrities.  But forget about the coolest technology trends and indie breakout acts.  The place to be this weekend was the Young Survival Coalition national summit.  YSC is an organization dedicated to helping young adults with breast cancer.  The conference included three days of inspirational speakers, panels on the latest medical research, and breakout workshops.  I found myself at a first-timers meet and greet, seated at a table of 30-something women, discussing fun topics like hot flashes, joint pain, osteoporosis, and ovarian cysts.  Oh, the joys of hormone-positive breast cancer! 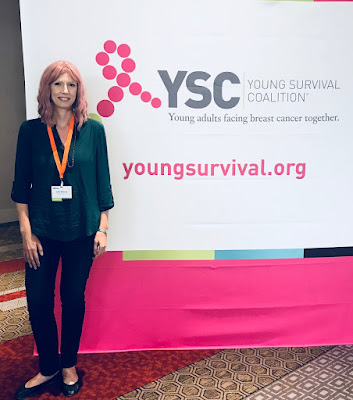 Speaking of ER-positive cancer, I attended an hour-long talk on endocrine therapy with riveting slides such as this one: 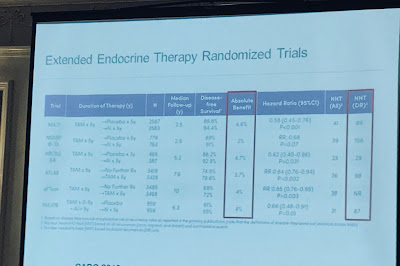 I have 20 photos just like this one, waiting to be studied.  Put that on my to-do-list.

I also heard a psychotherapist discuss how to cope with fear of recurrence.  When I am no longer seeing a doctor every week, I can expect crippling anxiety and possible panic attacks.  Good to know.

And of course, I attended the cancer memoir-writing session.  Because my surrogacy memoir needs a dramatic bonus chapter!

In all seriousness, it was inspiring to see so many young people trying to be their own health advocate, make informed medical decisions, and help others to do the same.  I had no idea that there were hundreds of other busy young moms who would want to spend their Friday evening listening to an oncologist give a talk on biosimilars.  The Kendra Scott swag bags probably didn't hurt either. 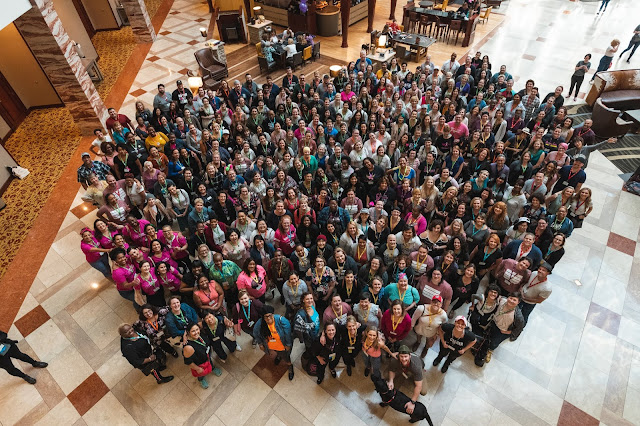 I missed the DrumFit class and the "Get Your Sexy Back" breakout session because I had to throw Claire's 3rd birthday party on Sunday.  It was rainbow-race-car-themed, because something like Paw Patrol would've been too easy.

But enough weekend fun!  Monday morning means back to medical appointments.  Jeff and I drove to Houston at 5:30am to obtain a second opinion with a breast surgeon at MD Anderson.  (Last time we met with an oncologist.)  They insisted I have a mammogram and ultrasound done first, but don't worry, they were only running two to three hours behind schedule.  I was told that's "normal" for a large medical center.  I'm lucky they let small-town folks like me in the front door.

When I finally saw the surgeon six hours later, the nurse commented that I'd lost five pounds, and I replied, "Yes, I was in the waiting room a long time."  The surgeon herself seemed competent and friendly, but some of my medical records had been misplaced, and ultimately she said the same thing that my local surgeon said.  No fancy targeted lymph node removal for me; it's too risky with my positive nodes and only for HER2+ or triple negative patients who experience total remission.  Everything in the cancer world is so complex that I still feel like I'm missing something.  Jeff and I took frantic iPhone notes on the car ride home, trying to remember any valuable medical tidbit.  Chemo brain has become a real hindrance to saving my life.  Or has it?  I don't know.