On Monday we celebrated Claire's actual birthday.  Her favorite gift was a tiny glitter squishy that she loses every half hour, sparking a frantic search.  She also got a teeny Beanie Boo puppy that accompanied us to the Rodeo and was immediately left on the flying elephant ride.  Jeff had to sprint from the pig races all the way back to the carnival to retrieve him.  Don't worry, we were able to avoid a meltdown with some deep-fried Oreos. 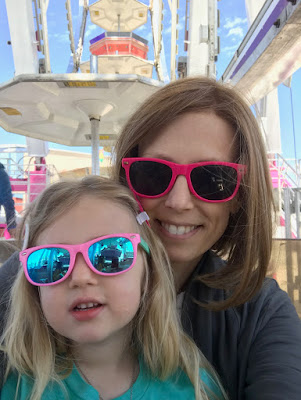 On Tuesday, I finally had my genetic counseling appointment.  When you're diagnosed with cancer in your thirties, you qualify for genetic testing.  My DNA was tested for 60 different gene mutations and came back negative for all of them, including BRCA1, BRCA2, and Lynch syndrome.  Bottom line: my cancer was caused by an acquired mutation (from eating too many hot dogs as a kid or drinking out of the lead hose).  Only 5-10% of cancers are thought to be hereditary, so that's not surprising.

My results also mean that Julia and Claire don't have any inherited gene mutations that make them more likely to be diagnosed with cancer in the future.  Yay!  Happy Birthday Claire!  You won't need a prophylactic mastectomy!

I did have one "variant of uncertain significance identified in AXIN2 related to autosomal dominant oligodontial colorectal cancer."  Try saying that three times fast!  It's still considered a negative result because there is not enough data.  I could get a phone call in 20 years that it's now positive and that I'm at increased risk for that specific type of colon cancer, but probably not.