Ah, the classic emotionally-charged scene where the cancer patient breaks out the electric razor and shaves their head.  Good times.

My hair has been coming out in handfuls and making quite a mess, so I decided it was time.  I invited Jeff and the kids into our bathroom and started hacking away with a pair of scissors.  Julia was excited at first but then didn't want to watch, so she and Claire played on their iPads.  I don't even think Claire noticed what was happening.  After I trimmed off the length, Jeff shaved my head with his clippers.  It's a little patchy and uneven but that will take care of itself soon enough. 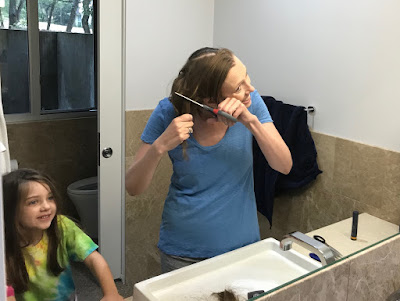 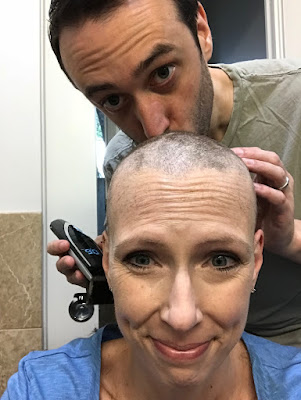 The whole experience was kind of empowering -- a nice f**k you to a society that values women based solely on their appearance instead of the funny, smart, amazing people they are on the inside.  I was already a low-maintenance girl, but my morning routine just got a hell of a lot shorter.  And good riddance to those four newly sprouted gray hairs.

I've never done anything dramatic with my hair before, except for a few sprays of Sun-In when I was a teenager.  Suddenly I have unlimited choices.  Rock the bald head?  Wear an antique pink wig and pretend I'm a celebrity?  Bangs?  Straight hair?  Curly hair?  Fun hats?  Scarves that scream cancer patient?  I modeled my wigs for Claire and she just said "no" to every one.  Julia likes this pink wig. 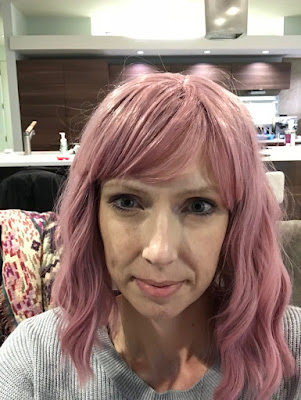 It's too bad that my hair will already be growing back by Halloween next year, because I've thought of some great bald-headed Halloween costumes.  Moondragon, of course.  Uncle Fester.  Mrs. Clean.  I'd be the hit of the elementary school Halloween parties.  All of the kids would want pictures with me!

Maybe by next Christmas, I'll have a cool pixie cut.