Today is a cancerversary of sorts.  It's been exactly six months since the day I was diagnosed.  And I won't be "done" for at least another year, depending on how many reconstruction surgeries I have.  And even then, I'll need an ovarian suppression shot in the stomach every 28 days for the next 10 years, or until Julia graduates from high school.

Anyway, one step at a time.  My mastectomy surgery is next week.  Tuesday the 16th at 1:30pm, to be exact.  To combat the anxiety, I've been doing some pre-surgical nesting.  I took an inventory of pillows and button-down shirts.  I filled my nightstand with gauze, surgical drain supplies, and heavy narcotics.  I stocked the pantry with bribes to keep my children under control while I'm recovering.  I even had my car washed and detailed for the first time in 6 months; I paid extra for the ozone treatment to get rid of that weird smell that Julia describes as "melted cheese and wax crayons."  I don't know why I bothered because I'm not even allowed to drive for at least two weeks after surgery.  I guess I ran out of things to clean.  I asked Jeff if I could organize his office.  He said no.

The pathology from my nipple delay surgery came back cancer-free, so I get to proceed with a nipple-sparing mastectomy.  You'd think my nipple would be happy about that, but instead it's peeling and bleeding and looking pretty sad at the moment.  All weekend I was worried that I had necrosis, but the nurse practitioner just told me to put some Aquaphor on it.

In other news, I was applying make-up in front of my magnifying mirror the other day and I noticed that I have a nose hair!  One single solitary nose hair!  Of course it's right on the edge, and under normal circumstances I would be tempted to pluck it, but I've decided to keep it as a sign of progress.  For months now, snot will just fall out of my nose with no warning, usually when I'm mid-conversation with someone.  I think nose hair must prevent that?  At least I stopped getting nosebleeds all the time.

I also have tiny eyebrow hairs growing back.  I can't wait until they look somewhat normal.  Every so often, I forget to draw my eyebrows on and later I'll be walking by a mirror and I'll think, "Holy sh*t!  Why is my forehead so huge?" 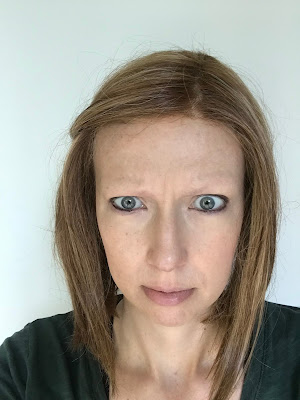 My eyelashes are in absolutely no hurry to grow back.  And I keep hearing from my cancer Facebook group that they'll fall out several times during the next year.  Awesome.

My hair is growing in patchy, so I think I'll be wearing wigs for awhile.  My "normal" wig is worn out and has a texture problem that conditioner doesn't fix, so I decided to buy a new one.  We had a family vote on what color I should order.  Jeff said platinum blonde.  My mom picked the most boring shade she could find.  Julia wants us to be twins.  Claire doesn't care. 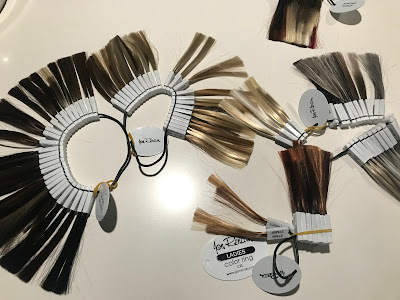 Hopefully my new wig arrives before Tuesday so I can look glamorous while I recover.  Ha!  Just kidding.  I'm not allowed to shower for two weeks or until the drains are out, and I don't plan on changing out of my Brobe.

I picked a good time to have surgery because it's officially too hot to do anything fun.  I'd probably be inside watching Netflix anyway.  I'm trying not to watch all of Stranger Things before my surgery, but I just can't stop myself.  You know when Will is happily living his life and then suddenly finds himself in the terrifying Upside Down?  FYI, that's basically what it's like to get diagnosed with cancer.