I had an early appointment time for chemo this morning, so I got a window seat.  (Winning!)  Unfortunately, I also got the IV pole with the stuck wheel (not unlike the bad shopping cart at the grocery store), which makes using the restroom or refilling my water bottle a bit challenging.

My cheap Coleman cooler hasn't been keeping my ice packs cold enough, and I want my fingers fully frozen during Taxol to ward off neuropathy, so I bought myself an outrageously expensive Yeti cooler.  I normally wouldn't pay extra for the trendy brand name, but the Yeti founders are my neighbors and I support local millionaires.  And today my gloves and ice packs were so cold that they burned my fingers.  Success!

After chemo I had another check-in with my breast surgeon.  She ordered a repeat MRI because my multiple lesions are hard to evaluate on ultrasound.  We also officially decided on a unilateral, nipple-sparing, modified radical mastectomy with a nipple delay surgery 2 weeks before the mastectomy.  The nipple delay surgery should increase my odds of success with nipple-sparing, and they also run pathology to make sure the margins are clear (if they aren't, nipple-sparing isn't an option).  Next week I have to choose between the two plastic surgeons I've met with, and then I can get surgery dates lined up.

This weekend I took Julia to her first monthly check-in at Wonders and Worries.  There were maybe eight kids there (all elementary school-aged) plus Sheldon the therapy dog.  The staff had organized an Easter egg hunt for the kids, and then they had a confetti egg fight while I watched from the safety of my car. 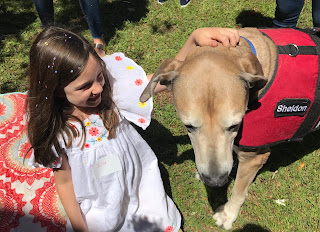 On Sunday I hid a hundred Easter eggs around our house for the girls.  To avoid sibling conflict, I used yellow, green, and blue eggs for Julia and purple, pink, and orange eggs for Claire, plus I used masking tape to divide the downstairs in half.  Claire asked for a "poop Hatchimal" for Easter, but as far as I know that doesn't exist (yet), so she got plain old Hatchimals, a poop emoji keychain, and poop stickers.  (Poop is a traditional symbol for the Resurrection of Jesus Christ, right?) 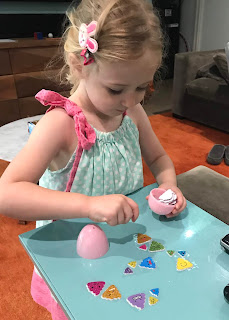 Yesterday, Claire disappeared upstairs and eventually came down with chocolate all over her face.  I asked her what was on her face and she said "skin."  She did her best to appear innocent, even with orange foil stuck between her teeth.  The Easter baskets have now been moved to the highest shelf of the pantry.