Yesterday, Jeff and I drove to Houston to meet with a plastic surgeon (Dr. B) who specializes in flap reconstructive surgery.  He occasionally teams up with my plastic surgeon in Austin (Dr. W).  They have known each other since childhood and went to the same medical school.  Dr. W told me a few months ago that I didn't have enough stomach tissue for DIEP flap but that I had "plenty" for PAP flap (taking tissue from the upper thighs).  Like Lizzo says, "Thick thighs save lives."  Dr. W wasn't comfortable leading a PAP flap surgery and suggested having Dr. B join my surgeon team.  Dr. B owns a ranch in between Austin and Houston and doesn't mind traveling to Austin for my surgery, but obviously I wanted to meet him first.   I was told that he was a "weird guy."

When we arrived in Houston, Dr. B asked me to talk about myself, and I immediately launched into my cancer diagnosis.  "Well, I have ER+, PR+, HER2- high-grade invasive ductal carcinoma...."  He interrupted and asked, "What do you do for fun?"  I couldn't think of anything, so I said, "Medical appointments?"  Dr. B explained that he can't operate on a patient unless he loves them.  I shrugged awkwardly and said, "I'm easy to love."

Then we did the fun part of the appointment where a room full of people watch the plastic surgeon grab handfuls of my "extra tissue."  Dr. B thought I had more than enough stomach tissue for stacked DIEP.  I guess all that late night snacking finally paid off.  DIEP is more common and has a slightly easier recovery, so I want to do DIEP if I can.

Then we got to watch a very graphic Powerpoint presentation so Dr. B could show off his smaller incisions in the muscle, resulting in a faster recovery time.  He also bragged that he never removes any ribs.  I didn't even realize that was a possibility.  So... good?  He also thought I'd be ready for surgery sooner than six months and suggested February for my surgery date.  I'm scheduled to see Dr. W next week, and hopefully he says the same thing.

After the appointment, Jeff and I drove back to Austin and ordered Tiny Pies to celebrate Canadian Thanksgiving.  I love indulging in dessert right after someone squeezes my stomach and tells me it's a solid C cup. 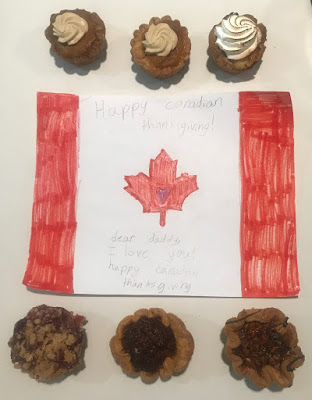