Every month, Julia goes to a group play session at Wonders and Worries.  The theme for August was medical equipment.  She got a doll patient who had to visit the radiation station and get an injection, etc.  She even got a take-home bag with a real needle syringe.  My instinct was to leap across the counter and knock the needle from her hand, but I refrained.  (Maybe if I let her play with needles, she won't kick and scream when it's time for her flu shot next month.)  Claire wanted to play too, so I gave her an empty medicine syringe.  Her favorite part of the game was offering her patients a lollipop and a sticker. 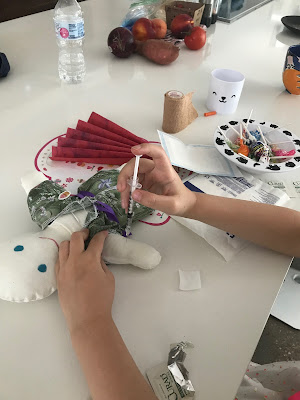 At Wonders and Worries, there was an independent filmmaker shooting footage of the kids.  She's working on a documentary called "Children of Disease" that advocates for more support for children with a chronically ill parent.  I hope she includes a scene of Julia bragging that she already knows everything about cancer.  Please don't give that child any more support!

While Julia was playing with medical equipment, I took part in a parenting support group.  One grumpy dad prefaced by saying that he would not be sharing any feelings with the group.  Geez, dude, relax.  It's about the children!  The therapist mostly talked about the healing power of play and said it's perfectly normal for kids to act out disturbing scenes involving death.  She asked us, "What would you say if your child was running over dolls with a dump truck?"  And one mother answered, "What the hell is wrong with you?"  After assessing our parenting skills, Wonders and Worries decided to increase the frequency of the parent groups.  Next time, I'm sending Jeff.  I'll have to lie and say it's a class on teaching your kids computer programming.

Speaking of classes, Claire's been going to speech therapy twice a week.  It's been great for her -- she gets a giant cup of gummy bears at the end of every session -- but I don't want her to change how she pronounces the word cancer.  She says "con-cer," like she has a posh English accent.  It sounds less scary that way.  I've adopted her pronunciation.