I had my first post-op appointment today (minus that trip to the ER).  I like my plastic surgeon's office because they give you mauve gowns that are flattering for my skin tone and less reminiscent of hospital stays.  The nurse said I was healing quickly and that I would probably be back to normal activities in 4 weeks instead of 6 weeks.  Despite the serious abuse my body has endured over the last year and a half – chemotherapy, surgery, radiation, proton therapy, surgery – it somehow remains resilient.  Mind over matter!
The nurse removed two of my surgical drains, which made me very happy.  (I was expecting to be stuck with all three drains for another week.)  I'm sure you remember my metaphor of having a giant spaghetti noodle pulled out from under my skin.  Jeff likes to watch.
I was going to post a picture of my surgical drain here, but I'm worried that my Dad will read this post and pass out.
My wound vac on my abdominal incision was also removed, so no more carrying around that annoying machine.  As she was about to peel off the plasticky sheet of Tegaderm from my abdomen, she warned me that it would hurt, but instead I breathed a giant sigh of pleasure.  "Oh God, thank you!"  Apparently my skin is easily irritated by Tegaderm, and it was causing an itchy rash and blisters.  I feel so much better without that plastic film.  Now I just have an optional piece of gauze on my abdominal incision and no other bandages anywhere.  It amazes me that I was cut in half a week ago and now I'm being handed Tylenol and a Band-Aid.  At this point, the majority of my discomfort is due to back pain from my bent posture.
The nurse almost removed my third drain (the one that sent me to the ER) because it's barely producing output, but after getting my hopes up, she decided to be cautious in order to avoid the risk of a hematoma.  Next Monday, I'll get that last drain removed and also one stitch on my left breast where the Doppler wand was inserted during that first 24 hours after surgery.
The question everyone seems to want answered is whether I'm happy with the results.  I'm not analyzing too much right now because I'm still hunched over and swollen and bruised, but I will say that it's a vast improvement over one hard tissue expander and one slightly droopy breast.  I will most likely need another revision surgery to perfect the shape and symmetry, but I'm feeling pretty good.  Give me a few weeks and I'll be parading about, braless, in my summer tank tops.  (I'm not allowed to wear underwire bras for six months.)  I was never interested in plastic surgery pre-cancer because of the unnecessary risks, but now that I've been forced into it, I can see why people do it.  Not that I'm going to start planning other fixes; I've had enough surgeries to last a lifetime (I think I listed eleven surgeries on my medical history paperwork, what with my broken leg and delivery complications and secondary infertility and cancer).
So it seems like everything is going smoothly, if I can just keep Claire from jumping on my stomach.  Here she is playing "cat on Mommy's lap" (with a collar she designed herself) and getting dangerously close to my incisions.  I should wrap myself in bubble wrap before I let her come anywhere near me. 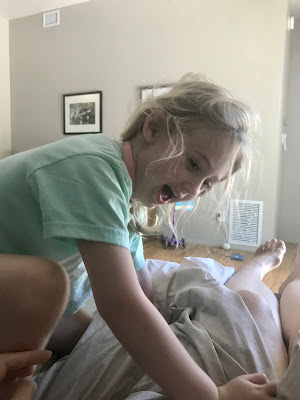 When I came back from the doctor, I told Claire that I was healing well, and she laid her head on my shoulder and said, "This is one of the best days of my life!"  And I said, "Why, did Grammy say you could have ice cream?"  And she said, "No, because of you."
And then I let her eat all the ice cream she wanted.
Labels: DIEP Flap Reconstruction