Yesterday I started drafting a blog entry about how boring radiation was and how I had nothing new to report.  But when I showed up for Round 3, the doctor pulled me aside into a little room, which in my experience is never good.  Earlier this week, I had asked him about proton therapy to better treat my internal mammary and subpectoral lymph nodes, and he advised against it due to weak data and the risk of heart damage.  But this morning, a new study was published that found proton therapy improved the overall survival rate for patients like me.  So my radiologist paused my current treatment and set up a teleconference on Tuesday morning with the director of the Texas Center for Proton Therapy in Dallas.  Due to the lifetime limits for radiation, my understanding is that I will have to choose between 5 weeks of proton therapy and the standard radiation that I'm receiving now.  And if I opt for proton therapy, I'll have to relocate to Dallas for 5 weeks.  I've always wanted to go to Dallas!  (No, not really.)  Now I get to spend all of Labor Day weekend stressing about this life-and-death decision.  Yay!  Tequila shots all around. 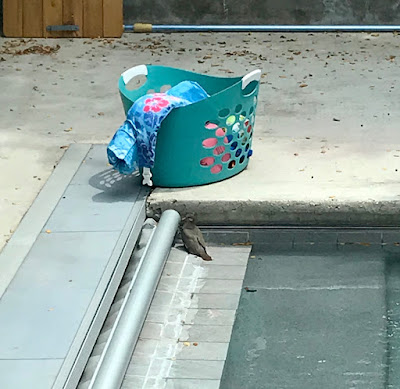 Speaking of life-and-death drama, we found an injured mourning dove trapped on the steps of our pool.  She was able to walk but couldn't fly.  We provided her with a cutting board "ramp," and she hobbled up onto our patio and quickly hid under our sand table.  At some point we realized that her baby was hopping around our backyard all alone.  We tried chasing the injured mother towards her baby, but it backfired and she ended up under our grill.  We tried making a trail of sunflower seeds.  We even called Austin Wildlife Rescue (they gave us advice but wouldn't drive out).  I've found dead birds in our yard before, but watching this saga unfold on our patio was emotionally draining.  The mother's wing wasn't broken or dragging.  Why didn't she just fly away?  At one point, I actually wondered if she had cancer.  The next morning, there was no trace of either the mother or the baby.  Perhaps they were eaten by a raccoon or a hawk.  Or perhaps they reunited and flew away to live happily ever after.  Who can say?