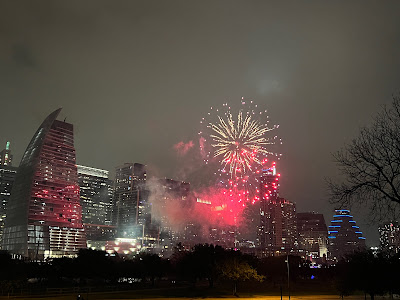 It's been wonderful not having anything to write on this blog. I sometimes forget this blog even exists. (Blogging? That's so 2005!) But then January rolls around and I start having flashbacks of dimly lit ultrasound rooms and straight faced radiologists, and that means it's time for another blog post!

I had my usual recurrence scan in November along with a virtual doctor visit to review my bloodwork and the images from my scan. At the start of the call, the nurse practitioner mentioned a spot on my lung, and I freaked out and yelled, "What?! No one told me I was metastatic!" She quickly explained that it was a benign spot that had always been there and that everything looked fine. She apologized profusely for causing me to panic, and I said, "No worries. I love these calls. I wish we could have them every month."

I do worry a lot about recurrence. I mentioned to my friend that I was depressed about Suleika Jaouad being back in cancer treatment (I've never met her but I read her cancer memoir about how she beat the odds and went on a journey of healing). My friend asked me how often I worry about that sort of thing, and I said, "I don't know, not that often. Like a few times an hour?" My friend seemed to think that was a lot, so I had to clarify, "They're just quick flashes. Like, for example, a bird will almost fly into the window and I'll think to myself, 'That was a close call. Life is fragile. I could die of cancer soon. Crap, I just remembered I have laundry in the washing machine. If I die of cancer, who the heck will do the laundry?'" My friend advised me to watch my negative thought patterns, so I resolved to focus only on the good things and to never think about cancer. A few hours later, I ran outside to give a holiday tip to my landscaper, and he told me his cancer was back and that he'd be out all of January. So I called my friend and told her it was impossible to not think about cancer and that the Wall Street Journal just published an article called, "Will We All Soon Live in Cancerland?" And she said, "Oh, what was the article about?" And I said, "Well, you needed a subscription to read it, but it didn't sound good," as if I'd proved my point.

So that's where I'm at. Trying not to think about cancer. Did I mention I started writing a novel? It's about cancer. Specifically, a fictional woman with metastatic cancer decides to hire a surrogate despite her short life expectancy and ends up forming a life-changing friendship with her surrogate. I wrote over 30,000 words during National Novel Writing Month in November. 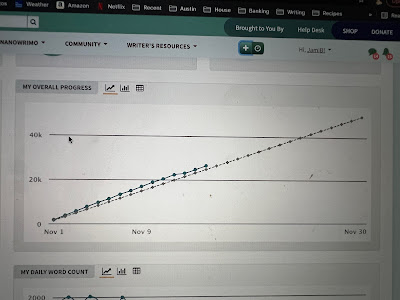 Since then, I haven't written a single word, but it's my New Year's resolution to get back into it and finish the book. And I've never broken a New Year's resolution, so you might as well go ahead and add "Untitled Project by Jami" to the list of Best Books of 2022. I'm also going to write the screenplay version of my novel because I miss being rejected by a slew of screenwriting contests every spring/summer and because Final Draft gave up on me and stopped trying to convince me to upgrade my screenwriting software, and now I have to prove them wrong by buying their latest product. "Hey, I still have dreams of making it in Hollywood! Take my money!"

I also bought a 13-week planner to help me achieve my writing goals. Some people buy planners that cover the entire year, but I prefer a shorter time period. Once you've had cancer, you realize how much can change in a year and that it's foolish to plan so far ahead. I figure everything should be fine for the next thirteen weeks, so let's start with that.

I know most of the people reading this are primarily interested in family stuff, so here's a quick update on the family:

That pretty much covers it.

Wish me luck not stressing about cancer while I finish writing my cancer-themed novel and screenplay.