A couple weeks ago, I used a printing service to turn this entire blog into a lovely hardcover book, a souvenir from my cancer treatment years.  When it was delivered, I flipped through the whole book, smirking at my drollery.  Then I closed the cover and placed it on my bookshelf.  Done.  Finito.  The End. 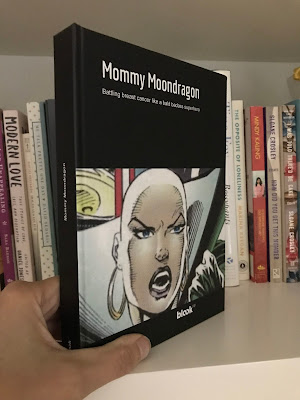 Almost immediately, as if I had jinxed myself, I started experiencing vertigo. Whenever I moved my head, it felt like I'd just stepped off a tilt-a-whirl. It was mild, not enough to make me lose my balance or my lunch, so I ignored it for a few days. When it didn't stop, I got on WebMD and reviewed the possible causes: inner ear disorders, head injury, certain medications, and of course, brain tumor. I immediately typed "vertigo breast cancer metastases" into Google. After an hour of torturing myself, I closed my internet tab and called my oncology nurse. She brought me in for an appointment, and after an examination and a review of my symptoms, she scheduled me for a brain MRI. "Don't panic. Don't panic," I said to myself. "You're just old. Old people have weird inner ear problems. It's just your body malfunctioning as you inch towards death at a totally normal pace. It's nothing to worry about."

MRIs are loud and unpleasant and typically require an IV, and a brain MRI has the fun addition of having the technician close a white plastic cage over your head before sending you off into the tunnel. They started blasting smooth jazz through my headphones, and I had just enough time to yell, "Are you serious with this music??" before I had to keep completely still for twenty minutes.

After I was freed from my brain cage, I went straight to Austin Pets Alive to adopt a cat. (It wasn't a spur-of-the-moment thing. I'd planned it in advance. A back-to-school surprise for my cat-obsessed daughters, after having discovered that Jeff isn't actually that allergic to cats.) Anyway, I was so busy filling up my house with cat supplies and reassuring the girls that our new skittish cat just needs time to adjust that I barely had time to worry about my possible brain tumor. Two days later, I received the MRI report stating that there was zero evidence of metastatic disease. Hooray! (There was an unsettling P.S. about an "incidental venous anomaly" but I'm choosing to ignore that.) Agreeing on a name for the cat has been the most stressful part of my week, and that's saying something. For now, we're calling her Mochi, after the Japanese dessert I don't care for. My house reeks of cat litter and canned salmon paté, but that's a small price to pay for your children's happiness, even if it only lasts a month. 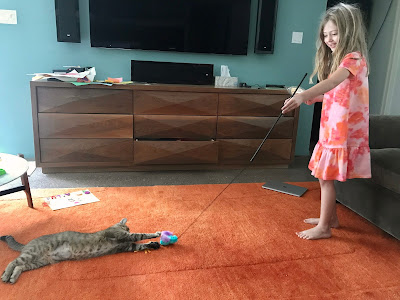 We're on week three of the new school year already. Jeff started attending engineering classes at UT as a non-degree seeking student, so it feels like I'm parenting three children through a stressful transition. "Honey, it'll be fine. I'm sure someone in your lab class won't mind being partnered with the old, cashed-out executive."

And what about me?  Ah, the old "What are you doing now that your youngest is in Kindergarten?!" question. Honestly, mostly reading on the couch next to Mochi. Which, for now, is pretty great.